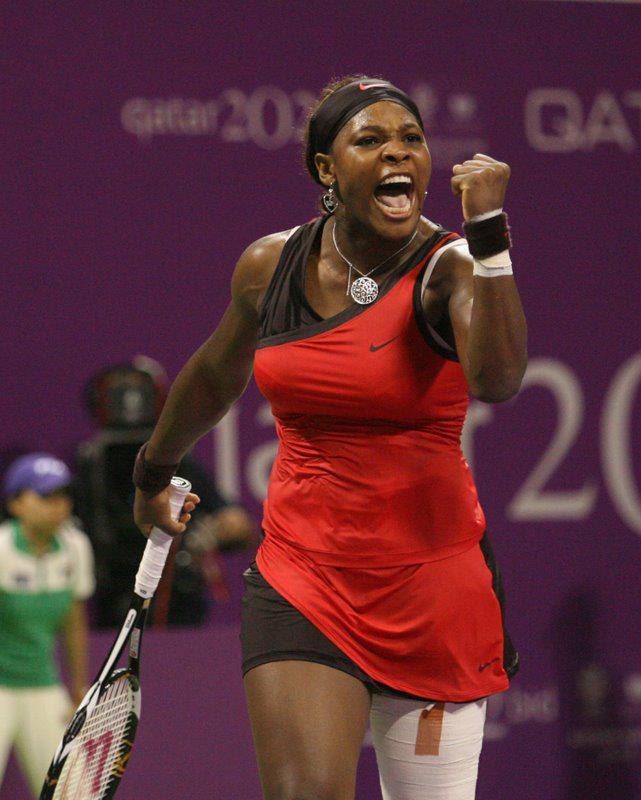 Hanson K Joseph [CC BY-SA 4.0 (https://creativecommons.org/licenses/by-sa/4.0)]
Women and especially professional athletes have for years faced unfair criticism and lack of recognition they deserve. Serena Williams is an example of a professional athlete to have come under the microscope regarding anger and the rights of women in their professional careers.

Late last year, Serena Williams’ loss at the US open exposed a queer question about women and their way of handling anger. Is there a general standard about how women react and handle anger? During the US Open Serena Williams confronted umpire Carlos Ramos for what she deemed to be unfair. Williams’ was consequently fined $17,000 for breaking three violations. This included abusing the matchday umpire and calling him a thief and a liar. The outburst became widespread and presided even to the award ceremony.

The outburst though cannot be compared to legendary bust-ups that have happened in Tennis. Male tennis players such as Roger Federer and John McEnroe have called umpires worse with fewer consequences. This begs the question; are women athletes treated differently compared to their male counterparts? Or perhaps they are interpreted and treated differently compared to male athletes when it comes to behaviour on the field? A study conducted in 2008 by Harvard University showed that women often receive a negative backlash for expressing anger compared to men.

Whatever opinion one might have concerning this case, there is evidently a wider issue concerning whether women are free to speak or not. Are women free to speak the same way as men or are they subject to certain expectations concerning language and behaviour?

Most sociolinguistics would certainly argue that women are subject or placed under pressure to speak in a more standard and polite way compared to their male counterparts. That’s because society has placed certain expectations concerning the behaviour of women. Whenever a woman deviates from these norms she is subject to intense pressure.

All over the world, we see women trying to negotiate this social obstacle in all walks of life, and this is the same as the case of female athletes like Serena Williams. Regardless of the status women are often overlooked whenever it comes to certain aspects of life. From professional work status to the family set up women encounter endless obstacles when trying to define their status.

Who is to blame for the confrontation?

Serena Williams main fault according to the umpire was that she was confrontational. The umpire penalized Serena after she called him a “thief and a “liar”. This is after the umpire had issued a code of violation. Confrontation and expressions of anger are not commonly associated with women behaviour and language. Women who confront or challenge society’s norms are subject to greater scrutiny.

In this scenario, society’s expectation of women as being shy, non-competitive and supportive may have directly contributed to the penalization of Serena. Williams case was direct as the call to have the umpire apologize essentially meant that the umpire was wrong. She extensively criticized his umpiring calls by labeling him a “liar’ and “thief”. Considering the societal expectations in mind, the Williams case came across as a marked aim towards the umpire.

Societal standards put on women affects their identity as evidenced in the Serena case. Most women are afraid to go out of context and face society’s stereotypical values. They are torn between making a choice of orienting standard forms that may be unsuccessful or orienting to the dominant status which may be interpreted negatively. They are thus subjected to certain limitations which are placed upon them by society at large, especially by men.

This makes it very hard and especially for female athletes to make decisions on how to present themselves to the public. The behaviour and actions are often put under immense scrutiny and this creates pressure on their mental processing capabilities. This vice goes further to influence the way other people interpret the behaviour of athletes. The influence is broad and comes from the fans, sponsors and even referees when they are making their decisions.

The negative perception of women who stand up and speak or are confrontational points to two things. When female athletes are being scrutinized they are first seen as women before being seen athletes. Their behaviour and actions are subject to gender expectations that the society expects of them. This is contrary to the rationale that female athletes are professions first.

Serena Williams outburst shows that women need to stand out on the professional side of life rather than by their feminine nature. The Women Tennis Association backed her severely showing how societal norms have been existing in the sport. No wonder in her interview Naomi Osaka didn’t agree that Serena Williams spoilt her celebrations. In her own words while being interviewed by Ellen she didn’t feel eclipsed by Serena’s outburst saying, “because I wouldn’t even know what I’m expected to feel.”

Both Serena Williams and Naomi Osaka actions during and after the awarding ceremony showed the need for women to be supportive and overcome the stereotypical ideologies placed on them. Women in general and in their respective professional need to acknowledge their roles and make it easier for others to follow. Serena Williams has helped the tennis federation to re-think about the way women are treated.

Both Serena and Ramos played villains and the tournament winner, Naomi Osaka, was denied the perfect and well-deserved joy. All the post attention after the match were turned towards Serena. The New York crowd was on her side and she acted in a wise and professional manner. After her anger and disappointment had subsided and trophies were awarded, Serena played the role of a peacemaker. She called on the crowd present to stop booing and celebrate Osaka’s victory.

Anger as most sociologists points ha the ability to eclipse happiness by far. The outburst as evidenced caused a lot of commotions with the New York crowd standing behind Serena. Naomi Osaka duly won comfortably and as professional athletes, Serena didn’t want to spoil Naomi’s party. She held her pride down and begged the crowd to celebrate the young champ. It’s just exceptional and magnificent to see such Professionalism and maturity from the veteran.

Practical lessons from the outburst

From this incident, Williams emerges a champion of a different class. Williams is viewed as a woman who pushes boundaries by shining a light on traditional standards that have been for decades. By speaking out against Ramos for penalizing her for her language which is less vulgar than ones used by famous male tennis players. From Roger Federer to Jimmy Connors, Williams has forced the tennis federation to examine why women are not offered the same accord as men.

Women from all circles and especially in the sporting disciplines are overlooked and easily targeted as the case for Serena. Evidently, less than 24 hours after the match Women Tennis Association came to her defence insisting that male players easily get away with similar behaviors.

From Serena Williams, confrontational women ought to have the courage to stand up and speak. Regardless of the event at hand, Serena stood by her own thought and ideologies. She has helped to raise the endless debate concerning women athletes and other women professionals. The Women Tennis Association rose to her defence and admitted that women athletes are treated differently compared to their male counterparts.

Women need to take a leaf from Serena and stand up for their rights and privileges which are important for the equality of gender. It’s important for them to be confrontational whenever they are faced by unfair decisions or criticism. Women associations as well need to support and come into help to help eliminate this stereotypical vices facing them.

It is important to recognize that anger can be healthy and constructive. This applies more-so to situations of changing unjust systems and in pursuit of happiness. Research in social psychology shows that expressing anger in scenarios where confrontation is necessary is robust than ignoring such feeling. It’s important for fans and readers to first analyse the basis at which they arrive at opinions. The expectations are placed on certain people to become so ingrained that they affect our overall processing of speech.

Our thoughts and opinions are not stored in a save ready for application. Instead, our experiences and behaviors are magnified and scrutinized through our social expectations. This is because experiences and expectations placed on us are often taken for granted and we rarely question the criteria that our opinions and assessments are based on.

Women have a critical role to play in ensuring that they are recognized and respected as much as men are. In the professional set up both men and women have the same right and privileges and thus they should be treated in the same accord. As Maya Angelou famously wrote, “you’re either a stone, or you’re too sick to be angry. You should be angry.” Bitterness is what Angelou cautioned us against. Anger in the service of change, however, was fair game

What YOU Can Learn from Stephen A. Smith… and Music!